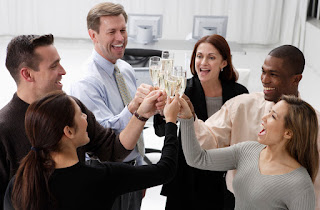 Ah! The Monday morning team meeting in my office - my favourite part of the day on all Mondays. This is when the entire team gets together and we discuss the status of the project that we are working on.
The reason I enjoy the meeting is because it is so nice to see so many of my colleagues who pretend to be busy all through the week and yet they produce the same updates over and over again every Monday. As per MV’s updates, her task is at hold (since.... March this year?? if I have got that right). Apparently she has been waiting to hear from the supplier end! With this year coming to an end soon, it will probably be next year that MV will hear from the suppliers.
SR’s short and sweet update every week is that ‘’everything is progressing smoothly’’…what is ‘everything‘if anyone ever bothers to ask? Yes I know about his online shopping .. … yet again he had a showpiece item for his home delivered to his office address last week! Indeed, his work is progressing smoothly.
Anyway, the optimistic project Manager of our team, tries to inspire us all by encouraging us to keep up the good work and says '' we are an A team''.  He must be right. Meet my hardworking colleagues namely:
Everybody, Somebody, Anybody and Nobody.
Most of the time Senior Management asks Everybody to do a task who assumes that Somebody would do it. Anybody can do the task but Nobody does it.
On that note, whenever there is an attractive assignment Nobody should be considered for it in the first instance. But Senior Team believes in Equal Opportunities and therefore opens it to Everybody.  Anybody stands a good chance to be considered for the assignment but in the end it is always senior team’s favourite Somebody who is considered for it.
Somebody is not used to working because, like I mentioned earlier, Nobody does the work normally. So when Somebody fails at the task he gets very angry about it and blames Everybody for the failure by saying that it was Everybody’s responsibility to get it right as Everybody is supposed to be an active team player! When blamed, Everybody fights for their corner by saying that keeping the best interests of the project in mind Anybody could have taken the initiative and saved the project.
But during the team meetings every Monday Everybody appears to be doing the most in the office. That’s because Nobody wants to point fingers at Anybody or Somebody so that Everybody is happy at the end of the day . We are indeed an A team, aren’t we??
Posted by Always Happy at 11:13

Labels: Anybody, Everybody, Nobody, Somebody, Team