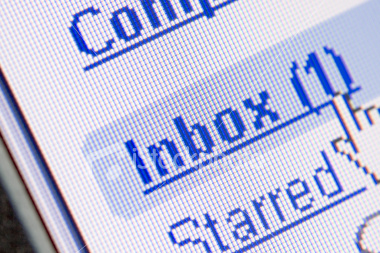 ooo...I have received an e-mail!!
This was my reaction when I saw J's email in my inbox this morning. J and I are friends since our school days. We used to spend a lot of time together chatting about anything and everything under the sun. Now geographically  J and I live far apart. It has been ages since I saw her. It was really nice to read her e-mail after several years. It actually made my day.
It is amazing to note how things change. One of my Social Studies assignments in Class 1 was to write a letter to a friend and post it (with a view to make us all aware of the different modes of posts, stamps etc).  We were advised to use an INLAND LETTER (inland letter? what is that???)....oh that seems to be a different world now.....I wonder if post offices still do sell inland letters?
Whenever I changed schools or when any of my classmates changed school, we promised to keep in touch by writing to each other. We religiously wrote letters and kept in touch. I had some pen pals too. Over the years, this changed and instead of sending lengthy letters to each other we were just sending greeting cards for Diwali, New Year, Birthdays and other important occasions.
Then began the era of E-MAILS. I created email accounts on sify, yahoo, hotmail, rediff, gmail etc. When friends parted we promised to keep in touch via emails. I must say, it went well for some time. After a while, we shared only e-cards via 123greetings, Anne Geddes, and Hallmark.
This era was soon replaced by the era of  MOBILE PHONES. All my friends had mobile phones. Thanks to the attractive mobile tariffs – free unlimited texts to any network anytime, 300 mins free talk time etc etc – we used to call each other to do justice to the free talk time. Once we exhausted all the free minutes, we used to text each other.  Initially, we made an effort to type meaningful texts. After sometime, it changed to sending only forwarded SMS friendship jokes . Few years ago on my birthday I received SMSs like – happy budday, hv a blast ; for Diwali and New Year I got some standard forwarded SMS greetings.
Whether it was letters, emails or SMSs, J and I always kept in touch. But when J decided to change her mobile network, she forgot to pass on her new number to me. We were out of touch for a short period.
Thanks to Orkut. We found each other again. It did not take us long to realise that the ‘IN’ thing was FACEBOOK. One fine day, when I logged into my Orkut account, I saw J had written on her profile – ''See you all on facebook’’.
I created a Facebook account too. Posting on each other’s WALL went well for some time. Gradually, as our friends list on facebook grew bigger, we resorted to MESSAGING on facebook. As the multifaceted social network site grew in directions, our communications changed directions too. We began doing complete justice to the ‘COMMENTS' and ‘LIKE’ applications on facebook. For a long time, we were just commenting on each others’ photos in facebook which needless to say was mostly – you look good, nice pic, thnx, :) etc. This was followed by a phase where J and I just kept 'LIKING’each others’ photos and status updates. Conversations were just fading so rapidly. Soon we were only helping each other in farming on FARMVILLE and adopting ‘ugly ducklings ’and ' lonely black sheeps ' from each other’s farm.
Shortly after that, J began to contact ‘Anita the Psychic’ and trust her forecasts. I still kept 'liking' those forecasts.  J  was perhaps very busy for the last few months. We had just been ‘POKING’ each other!

So, tell me, do I not have a reason to be excited today when I’ve got Mail?

The world of communication is changing so rapidly. Popular fads are created almost every other day. I wonder what's next??