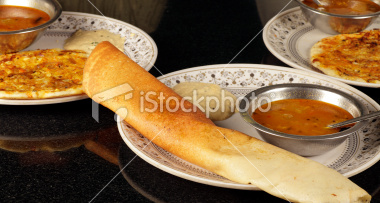 I just watched an episode of Masterchef India. I found something funny there. One of the tasks for the contestants was to prepare the perfect dough for Malabar Paraathas. All the contestants seemed to count stars when they heard the name MALABAAR PARAATHAS ! Some of them said, they never heard of the Malabar Paraathas, one said she knew it was a South Indian Speciality but didnt know how to make it. etc etc.

Another task was to prepare a crispy Dosa. None of the contestants got it right in the first instance and so the judges had to give everyone a second chance.

When it came to inventing a Paneer dish, people came up with dishes such as Paneer LASAGNA, CANNELLONI and ARGENTINEAN BONG MEAL that are NOT native to India. Fair enough......the task demanded invention. But why did people not come up with some Indian Dishes? No offense to anyone but it really makes me wonder....One has never heard of a South Indian Paraatha and if one has heard of Dosas, one does not know how to prepare them!!!! How is it that people have heard of  Italian /South American dishes and know how to prepare them even???