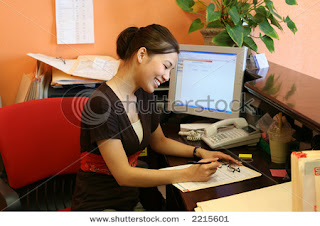 Few minutes ago, I was having a telephone conversation with one of my colleagues S who has just returned to the town after a few days of holidaying in the Caribbean. While I was updating S with the happenings in the office over the last few days, I mentioned about our receptionist T.

T is a lovely lady. She is very efficient and helpful. There is never a dull moment for her. Throughout the day, there are visitors hanging all over her desk asking for directions and help; internal staff members asking for posts, printer cartridges and stationery; goods delivery guys asking for keys to storage area; internal and external calls waiting to be transferred; arranging cabs and train tickets for staff members when requested - the list of tasks that people request of  T is endless. She is just so busy all the time, in fact very very busy. Yet T is so calm. She never twitches  her eyebrows when one asks her for help. She always goes that extra mile to help the person approaching her. What a terrific customer service! T is just so good at what she does. I would call it quits long time ago if I were in her place.

It is well known in our organisation that T's manager is nasty to her. Perhaps she is envious of T's professionalism and more so, because of her popularity.

T was due a promotion last week to be Facilities Officer. Unfortunately, T's manager has denied this and another lady has been offered the higher up job on the grounds that T still needs some more time to be able to handle the pressures of the new job!!! It is unfair but no one has done anything apart from sympathising with T. The nice person that T is, she has not complained about it. Instead she said, '' I will wait for the right day''. Hats off to your optimism T. I hope that day is not too far.

Coming back to my conversation with S earlier today. I was saying how awful it is that T has not been promoted.

''that's why I am saying she should have been offered the promotion.''. I said ( thinking, what is S taking about?)

'' Well, don't you know? NICE PEOPLE ALWAYS END UP LAST. To get moving higher up in jobs, one needs to forget being nice''. Said S.

I was dumbfounded to hear that. I just left the conversation about T at that. S and I spoke about other things and we dropped the call soon.

But since then S's words are resonating in my ears. ''NICE PEOPLE ALWAYS END UP LAST. To get moving higher up in jobs, one needs to forget being nice''.

I do not agree with S at all.  But is there some truth in what S has said? Does being ''nice'' not take one anywhere??