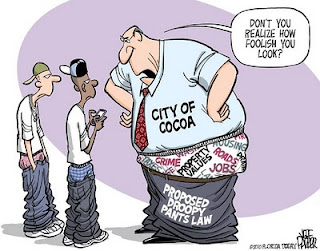 Nah, you got that wrong. I am not talking about Rupa but I am talking about sagging jeans.This evening at the traffic light I saw this guy cross the road. His jeans were only slightly above his knees. It had slipped too far from his waist but just enough to show his funky boxers.A lot of guys these days wear those sagging jeans. They think it is cool. But I think it looks hilarious. Have these boys not outgrown the age where their trousers sag?? Then there are some jeans with a faux-boxer band attached to the back of them so it only looks like they're sagging...but not really. Now that is ridiculous. The fad supposedly started in prisons but I think there might have been numerous other reasons behind how this trend originated:

1)      Belts must have failed to serve their purpose
2)      It is time saving as they only need to get the jeans up to their knee length
3)      Perhaps there was shortage of denim materials
4)      Underwears became more fashionable but only Superman is allowed to wear them over his trousers. Rest of them have to wear their jeans around their knees to display their underwears.
5)      Underwears became a medium of advertising.
Whatever may be the reason behind the trend of sagging jeans, It is no longer andar ki baat hai. Aaj kal yeh baahar ki baat ho gayi hai!