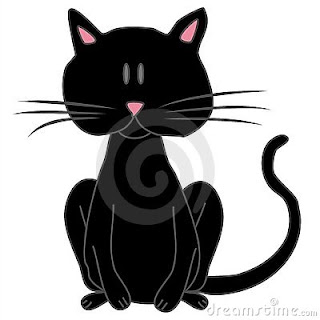 ab kya hoga?
...
Whilst driving to work this morning, as I pulled off my drive way onto the street, a black cat crossed my path. Generally, I am not superstitious but this was the first time ever that a black cat had crossed my path at the start of the day.  Immediately, I wondered if something wrong was going to happen today? I slowed the car and took a second look at the cat to find out if (read hoping that)  it had any specks of white colour on its paws or coat. But none.. it was a pure BLACK CAT.

I did not have enough time to take a turn and drive back home and then re start my journey . There was no other side street there either. I had no choice but to continue with my journey. During the rest of my journey, I kept thinking if something wrong was going to happen to me today. Even in the office,  I carefully watched each and everything that I did/happened around me. To my surprise, everything went well till the close of play. Of course, I was pleased about that. But it only meant that I was going to be nervous during my journey  back home fearing that something wrong might happen then.

As I left the office premises,  I began to drive extra cautiously so as to try my best to fight the bad luck that the black cat was going to bring on me. In this attempt, I took a weird turn into a road and Thuddddddddddddddddddddd -  banged the front left wheel sharply onto the kerb. First thing that came to my mind then was – the BLACK CAT!. I restarted the engine and moved on feeling relieved that entire day the bad thing that I was fearing might happen had now happened and everything was going to be fine thereafter. I drove home safely.

On second thoughts, a lot worse could have happened. I could have crashed into the shops by the side of the road or onto an oncoming vehicle or onto a pedestrian even. Perhaps, the Black Cat brought me some good luck then and prevented such accidents from happening???Anyway, in some of the European countries, having a Black cat cross your path is considered a good omen.

Well, I think it is all in the mind. A Black cat is a black cat. That is all. It has no special power to curse someone to have a bad day or to bless someone to have a good day. If you believe that something good is going to happen to you then the positive frame of mind is going to help you appreciate everything around you. On the other hand, if you are in a negative state of mind, like how I was today, then you are bound to do something wrong. Why blame it on the poor cat? Entire day today, I had been thinking that something wrong was going to happen which influenced my driving and so crashing into the kerb was bound to happen.

OK. So, what does a black cat crossing your path mean then? Well, it simply means that the cat is going to other side of the road!! 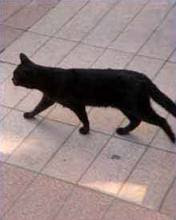